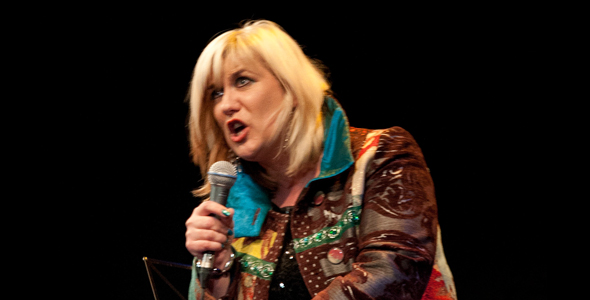 Our 2013 Website Poet in Residence was Kate Fox, who was attending the Festival for the very first time. Kate has has been a regular Poet for Radio 4’s Saturday Live since 2007 and she was Poet in Residence for the Great North Run in 2011 (writing and performing a poem whilst running 13 miles).

Kate is also a comedian and her show about not wanting children – Good Breeding – will be at the Edinburgh Fringe this year. Her collection of new and selected poems "Fox Populi" was published this spring by Smokestack Books. Find out more about Kate at www.katefox.co.uk or on Twitter @katefoxwriter. 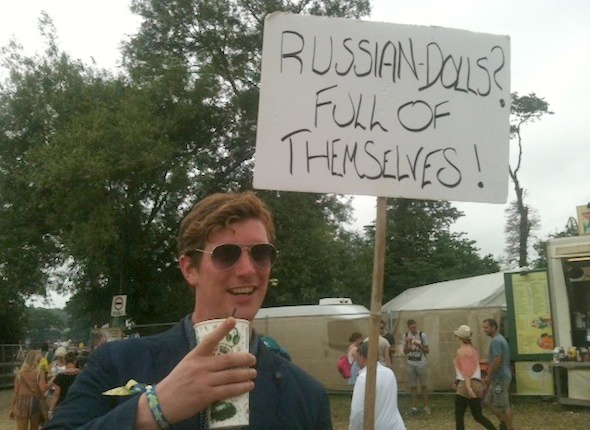 They say we are here, find us,
we’re not just a face in a crowd.
They say "I support Wolves"
or "I’m from Somerset and proud".
They are landmarks,
reminders,
beacons.
"I have the flag of Mexico,
so other Mexicans will say Hi!",
"People remember our banner,
we use the sign for Pi".
"Free Range Human"
is from a Stornoway lyric,
"God Hates Flags"
brings a smile to the cynic.
Prince Harry could have carried
a Union Jack to say "Look, look Grandma!
This is where we are".
"Marvin the Monkey’s been coming for years"
Getting irretrievably lost is one of our fears.
Flag carriers are asked to stand still,
signposts for those who’ve lost their way.
Some people find them irritating
they say they block the view,
sometimes others self-expressing
is annoying,
because you wish that it was you.
I think of the clay army of self portraits
outside the Poetry and Words tent,
where words are woven and teased and meant.
People mould them to commemorate
special dates,
births and deaths,
their own quirky features,
to produce different
but similar creatures.
You don’t have to raise some material
at the end of a very long pole,
but finding a single message
can make your separate parts a whole.
Glastonbury will hoist its flag again,
so the like-minded can gather there,
to find and to be found,
see you in the Pyramid field next year?

A Story the BBC Didn’t Show

Elvis Costello’s train broke down at Grantham.
A powerful engine can strand passengers
no matter what the signals show.

The part of his set where he told us this
was left in the sidings by the BBC.
Who wants to be stuck at Thatcher’s birthplace
while workers from the (soon to be re-privatised) East Coast Mainline
are forced onto the tracks
to tramp the dirt down.

He can watch Glasto on a plasma telly,
there’s steaming showers
if things get smelly,
but there’s not a single speck of dirt
in Mick Jagger’s Yurt.

There’s a chef,a pool
a heli-pad,
a jester ready if he gets sad,
and supermodels fight to flirt
in Mick Jagger’s Yurt.

A string quartet lulls him to sleep,
a jumper’s spun
from his personal sheep,
The security guards are never curt
in Mick Jagger’s Yurt

It’s not ordinary life he wants to dodge,
it’s just Glastonbury’s not got
a Travel Lodge,
but even Bono would sell his shirt
to sleep in Mick Jagger’s Yurt.

Oh go on, we all do it,
though it’s not about the stars.
We wonder when they’re dropping down in a chopper
or rolling up in their fancy cars.

It’s why some have special passes
to get themselves backstage
and mingle with Mick and Brucie and Rita,
the Greek Gods of our age.

I think I saw Reginald D Hunter,
and Meg Matthews in 3D
& some boys in bands with interesting hair
from the cover of NME.

I even did it at the Left Field
during a discussion on Labour and class war.
I thought Oo-that’s Tom Watson in real life,
he owned Rupert Murdoch on News 24.

I believe that we are all equal,
that celebrity culture is vapid and shallow
but, oh-is that Alexa Chung walking past?
She looks ever so good in yellow.

The Hives’ frontman Pelle stormed the Other Stage,
he played us like a piano,
because he really spoke to the crowd,
we went wherever he asked us to go.

He said he hates it when bands ignore the audience,
that’s something that annoys me too,
if you’ve acknowledged them,
then they should acknowledge you.

I think we crave a higher level of contact,
when the Real is increasingly rare,
being able to reach out and touch someone
being able to say "I was there".

We’re all in the mud and the glitter
and it’s making us feel less alone,
we’re experiencing this festival together,
(Unless possibly you’re a Rolling Stone).

The Rolling Stones have just played the Pyramid Stage
for the first time since they were defrosted.
It’s 35 degrees in the shade, the solar deflection canopies are decorated
with outline maps of Britain before the Great Flood of 2085
(A record year for Glastonbury poncho sellers).
The price of grass has soared. Meadow grass.
People photograph Worthy Farm’s carefully cultivated patches
on their retina-cams. Their prize-winning herd of milking camels
give rides from the Chris Moyles stage to the Green Fields.
A man with an icicle-white beard and a Greenpeace T shirt shows archive footage
from 2013; close-ups of Paula the polar bear’s fur, the Arctic Dome.
Says "Back then, we showered you with snow, emphasised the short window
to Save the Arctic, well…" he turns out his hands, gestures to the yellow sky,
"We told you so". 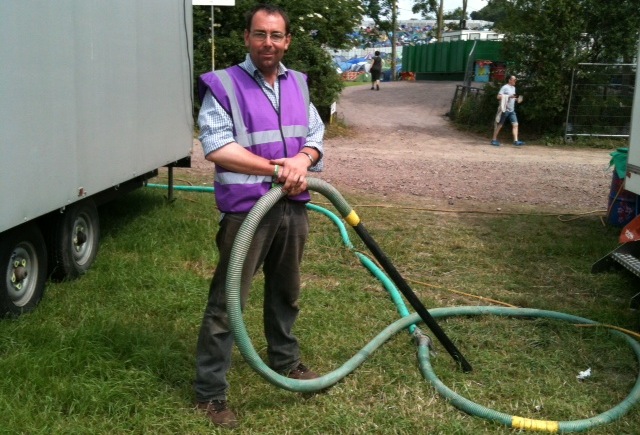 You can download all the footage,
stream the bands non-stop
but you’ve not really experienced Glastonbury
without a long poo drop

and your Glastonbury Festival
will not have been complete
until you perfect your hover
above that fragrant toilet seat.

The breeze on your nether regions
offers a peculiar kind of bliss
and if you visit in the middle of the night
you won’t have to glimpse the deep abyss.

I must confess, I’ve access
to some posher kinds of loo,
they flush recycled water
that’s been dyed a chemical blue

I spoke to Simon who empties them,
he says they smell quite nice,
though you wouldn’t want to drink the water
by the time it’s been round twice.

Normally he’s a farmer,
but can turn his hand to a pipe and a mop.
He says he enjoys meeting people,
once he’s pumped away their plop,

I ask him for the worst sight he’s ever encountered,
he refers to the medics tent,
I thought he was going to reveal the aftermath
of some huge accident.

But he said the medics turds are massive,
the biggest he’s ever seen
He can only think it’s their healthy diet,
the effects of rice and bean.

I know sludging through the sewage
is not to everybody’s taste,
but the sheer scale of this event
means we’re cheek by jowl with waste.

No poet can ever hope to convey
the Glastonbury toilet whiff,
you’ll just have to scent it for yourself
or wait til the Beeb does Scratch and Sniff.

Multi coloured bubbles,
dream catchers, secure bases.
Flimsy canvas interface between private and public spaces.
Tiny canvas universes, dusty storerooms,
cosy dens, claustrophobic tombs
Some people can carry home everywhere
like a snail or a hermit crab,
some people spread out fast and loud
-like an army on a land grab.
Some ease slowly into their field
like small animals who fear becoming prey,
some will only just have got here
by their final day.
Some will stay in corners
in case they have to flee,
some feel like habitants here,
whilst everywhere else they’re a refugee.

I have my wellies,
a pack-a-mac,
sunscreen and a brolly,
I’ve got some ear plugs,
a plastic bowl,
wet wipes and a trolley.
I’ve got a tent and my ticket,
a camera and dry hand gel,
will I need a solar shower
and an extra ground sheet as well?
Should I bring a Quick Dry towel,
a stove and a mosquito net?
I haven’t got a cafetiere
or an antimacassar yet.
I think I’ll need some crutches,
a harmonica and a sheep,
a pasta maker,
a belly button de-fluffer,
and a lullaby to help me sleep.
A mind-expander,
a rhyme for orange,
my soul and a steady gaze,
some questionless answers,
a left brain-trancer
and a year of extra days.
Pandora’s Box,
some anti-matter
and the sound of the earth
as it’s turning,
fathomless silence,
Fermat’s Last Theorem,
and my generation’s unsaid yearning.
The meaning of life,
the horror of it all
and the truth that will finally save us.
I hope I can fit all that in
my bag
cos I’m getting there
on the bus.

It’s not as good as it used to be
or it’s better than it’s ever been.
It’s somewhere to see things in a whole new light
or just somewhere to be seen.

You don’t go there if you want to be free
or, it lets you be whoever you are,
It’s where everyone’s equal with mud on their feet
or the corporate culture has gone too far.

We used to go there to escape The Man
and now we’re worried that he’s there,
or it’s still a place to explore an ideal world
and find new ways to make it fair.

It’s a posh prison camp, the Kate Moss show,
it’s a place to flog your brand
or it’s a community of exploration
which can inspire you to take a stand.

It’s a farmer’s visionary gift,
a jewel for the nation,
or a symbol of selling out,
a site of working class alienation.

It’s too expensive and corporate,
I’m fed up with all that shit
or it’s a place for beautiful pleasures
where the alternative flame’s still lit.

It’s too multiple for simple labels,
I suspect it might be all of them and none
but I don’t want to be burdened with other people’s baggage
before my packing has even begun.

I’ve never laughed at Andy Murray
and I’ve never been to Glastonbury.

I could carry on listing forever,
these things that I’ve never done,
but now I’m going to experience
thousands of them in one.

There are so many things we’ll never do,
many of them unnecessary,
but for me this one’s a rite of passage,
I’m finally going to Glastonbury!