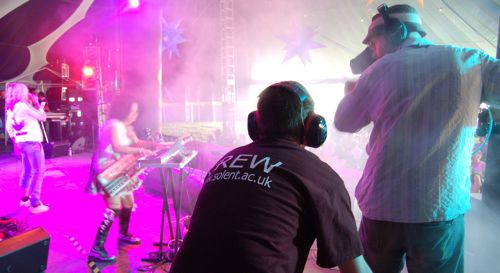 More than 30 Southampton Solent University students will be leaving their lecture theatres to head to Glastonbury this year, for some pretty enjoyable work experience.

Since 2004, the University’s Broadcast Journalism, TV Production, Media Technology, Film and TV students have played a key role in the Festival through an exclusive work placement which sees them filming top acts, shooting and editing short documentaries on site and sending footage across the world.

This year, the students’ work will include multi camera filming from the Dance Village, the John Peel Stage, Dance Village, Fields of Avalon, The Park and Healing/Craft field, as well as a documentary about the festival’s eco credentials.

Solent’s Glastonbury creative director, Tony Steyger, said:  “Glastonbury is fantastic work experience for our students, who have to work incredibly hard and think on their feet.  The university prides itself on providing students with the very best professional training on real world projects – and it doesn’t get much more real than here at Glastonbury."