Emily: “I was blown away by the might of Beyonce’s show”

We gave Glastonbury co-organiser Emily Eavis a shout to catch up about the recent headliner announcements and to find out how preparations for this year’s Festival are coming along.

Hi Emily, how are you?
Good thanks. It’s been pretty hectic here, with lots going on. Things always change gear in January and the year has kicked off at a pace. It’s looking set to be a great one, though – we’re making lots of improvements across the site, so it’s easier to move about and better all round. We’re always trying to make it better.

So, there’s been some big Glastonbury news in recent days. Firstly, Beyoncé announced that she’s headlining the Sunday night this year.
Yeah, it’s great to get that out there. I went to see her live last year and was blown away by the might of the show. She has such soul, an amazing voice with an incredible, all-female band. She knows how to deliver live, and she packs a big punch – it’s gonna explode! And she is, I believe, the first female solo artist to headline, so it’s a big moment for us. What better way to see off the Festival till 2013?

Why did you guys decide to book her?
We are really keen to keep the line-up as diverse as possible. It’s always been that way. We really want the people who are the masters of their fields, and that’s what she is. 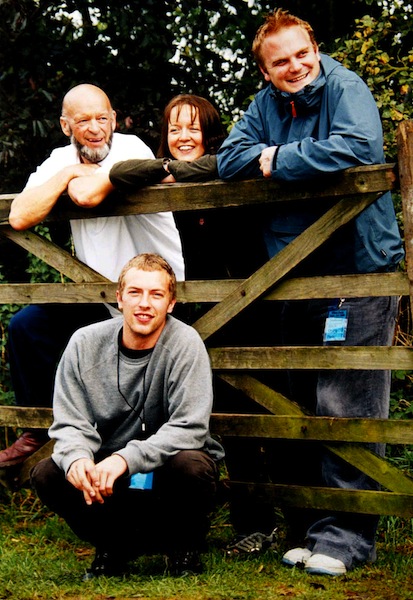 Then, of course, Coldplay were confirmed as Saturday’s headliners today.
Yes, we were really lucky to get them. It’s been a while since they came and played here, so I think this will be a big one. They’re one of the great Glastonbury bands, that really get what we’re about and that have supported us through some tricky times.

As your dad said, they really have grown up with the Festival.
Yeah, they started on the John Peel tent in 1999, then moved to the Other Stage in 2000 [pic, left], before making a huge jump to Pyramid headliners 2002. There aren’t many bands that rise that fast. They are loved here, and deliver such powerful live shows – it will be awesome.

And we gather from Coldplay’s Twitter page that Chris Martin was down at the farm at the weekend?
Yes, they came to look at the farm and the field to start planning their show.

Will more line-up details be released soon?
Yes. We hope to give you some more names soon – as soon as we can, in fact. We would love to tell you everything right now if we could, but many stages aren’t quite finished and many bands are announcing tours or big gigs first. We are working on getting it out there before very long though, so thanks for your patience and please bear with us.

How are the rest of the preparations coming along?
Really well, thanks. We’re working on expanding the late night areas – Shangri-la, Arcadia, Block 9, Common etc – as it got pretty busy down there last year. We also have the new addition of the 1971 Stage, which should be interesting. It will be featuring artists from the 71 Festival. Plus, Leftfield is moving back to its old home, by the Leftfield tower. So, yeah, lots going on right now.

Do you think that with 2012 being a year off, you’re even more determined to make 2011 a good one?
Yes, absolutely. We feel really lucky to have gathered together such an exciting bill for a start. All the areas have great plans and people are working like mad across the site to make it brilliant. There’s a feeling in the air that it’s the last hurrah before the year off and hopefully a suitable climax to the amazing run of the past five years. We’re trying our best to make it as good as possible… and we’re definitely getting closer!