Each of the finalists from our 2009 Emerging Talent Competition will be performing at this year’s Festival. Ahead of their trip down to Somerset, we’ve asked them to write a blog telling us about their experience of the competition and their plans for the Festival. Our fourth blog is from Oxford’s eclectic folk-popsters Stornoway. 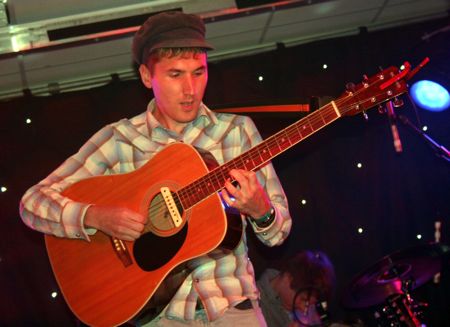 We’re good friend with previous GETC runners-up and fellow Oxford band The Epstein, who encouraged us to get involved in the competition. While Brian was away in Ecuador buying Alpaca-wool hats for the rest of the band (with no internet), we received the email saying we’d made the finals. We were all astounded. To get through all those thousand of acts who’d entered, with our simple songs and humble Oxford following, was a huge surprise and pretty daunting. It turned out a friend had a bus driver’s license, so we hired a proper 15 seater tour bus and, feeling like schoolboys about to embark on a field trip, set off for Glastonbury. The passengers included:

After taking a pre-gig walk out to the scaffolds of the Pyramid stage to set our nerves straight, and getting our cameras out to photograph the Tor in the sunset, we went back to the green room for a quick drink. Possibly the strangest and most nervous moment of the whole night was while the announcer talked us up to a crowd who were suddenly totally silent in anticipation of the music. The four songs went well, although the adrenalin meant all the music seemed much slower than usual, as we forced ourselves to concentrate fully for every moment of the set. After the final cheers and a handshake with Mr Eavis, it was time for a quick game of hacki-sack. Before leaving I think every one of our 15-strong tour team had drunkenly hugged Huw Stephens, and told the Eavis family how much we were looking forward to the Festival in June. Eventually we all crammed into the bus and spent the three hour journey being interviewed by the hilariously drunk Tim Bearder from BBC Oxford.

Since the competition we’ve strengthened relationships with a lot of BBC Radio One personalities, including Huw Stephens and Colin Murray, and been played on Rob da Bank, Steve Lamacq and Zane Lowe’s shows. Steve actually turned up to a gig in London recently which was a massive surprise! Tom Robinson from BBC 6Music also likes us, and introduced our slot at Radio One’s Big Weekend in May. We’ll be playing on his stage at Wychwood festival at end of the month.

We’ve also been reviewed in the Independent, Guardian, and online at several blog sites, so the Glastonbury experience so far has really been very enjoyable and helpful to us. We can’t wait to see it through with the festival next month. It happens to be on the day after we all finish exams and jobs, and will mark the start of our biggest summer yet.

Amazingly, we now have five slots at the Festival!

– Queen’s Head Stage, thanks to the Emerging Talent Competition. Apparently we’re on second. We’re really looking forward to this as it’ll be like the competition itself, with all those great bands performing together, but with longer sets from each so we will get to hear alot more of everyone.
– Acoustic stage, probably our biggest slot and what we’re most looking forward to. It won’t actually be "acoustic" as in unplugged, so we’ll have our full band sound and there’ll be lots of other "acoustic" sounding acts similar to us.
– Avalon stage
– Avalon cafe stage
– Worthy FM session

It’s going to be a busy few days! None of us have been to Glastonbury before, and coming from South Africa, Rob and I had never actually heard about it before, until a few summers ago our neighbour appeared walking mudshod up the street, carrying his wellies and grinning wildly, saying he’d "just come back from seeing James Brown" and spent five days unwashed to do so.

It’s a really exciting time for the band. We don’t have any idea at the moment what’s in store for us – anything could happen! Being unsigned we aren’t yet at a touring stage – but this is great as we’re getting a lot of exposure through smaller festivals and getting more rehearsed every time we play.

My personal hopes would be for some European touring later this year (we’ve already recieved offers of gigs in Norway and Germany), a small tour up North before Christmas, SXSW in Texas next April, and then another summer of festivals as these are definitely our favourite gigs. We’ve always had this vague idea of setting up our amps on a boat and sailing up to Scotland, to visit the real Stornoway town – perhaps this is something for late summer 2009 to promote our second single!

But our real hope is to take Stornoway as far as possible, which means a good few albums and many years working together. We have diverse musical tastes and ideas, so it’s great being part of this – it’s unpredictable and endless fun.