Each of the finalists from our 2009 Emerging Talent Competition will be performing at this year’s Festival. Ahead of their trip down to Somerset, we’ve asked them to write a blog telling us about their experience of the competition and their plans for the Festival. We begin with Cardiff folkies The Gentle Good. 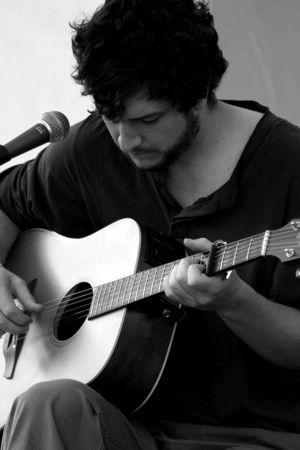 In January I entered the Glastonbury Emerging Talent Competition not because I thought I’d get anywhere, but simply because I thought a booker somewhere at the Festival might like my music and put me on a small stage. I went to the Festival in 2005 and got my bronze swimming certificate and since then I have been very keen to return and see if I can progress further. I was more surprised than anyone when the organisers rang and said I’d got through to the last twelve. It was a strange feeling – a blend of joy and dread. Joy at having been picked by such a prestigious panel and dread at having been picked by such a prestigious panel. There was also my natural distaste of "battle of the bands" style gigs, which I feared would devalue the musical experience and compromise my integrity as an artist. I soon brushed that aside however when it became clear that I would get to hang around with famous people.

It was great to perform at Pilton Working Men’s Club and to meet some of the other bands. I felt that my set went alright but I let my nerves get the better of me and didn’t quite pull off the blindingly brilliant show I’d been planning. It was all worth it though just to get the chance to play at Glastonbury Festival, and to meet Michael Eavis of course! I understand that the Queen’s Head Stage is massive and even if it is half empty it will still be the largest audience I’ve ever played to. I’m also playing at the Avalon Café Stage earlier in the day and I’m really looking forward to that too, as I have a slightly longer set to sink my teeth into.

I have a really hectic summer of gigs ahead of me but I’m sure the Glastonbury gigs will be special. I’m not going to be able to hang around for the rest of the Festival however as I have to fly to Washington DC on the Friday morning to play at the Smithsonian Folklife festival that weekend. I’m really sad to be missing the bulk of the Festival but I’m also very excited about playing in the States – it’ll only be my second trip there. Hopefully I’ll play Glastonbury again in the future and I’ll be able to stay for the whole weekend!

Click here to check out The Gentle Good’s MySpace.