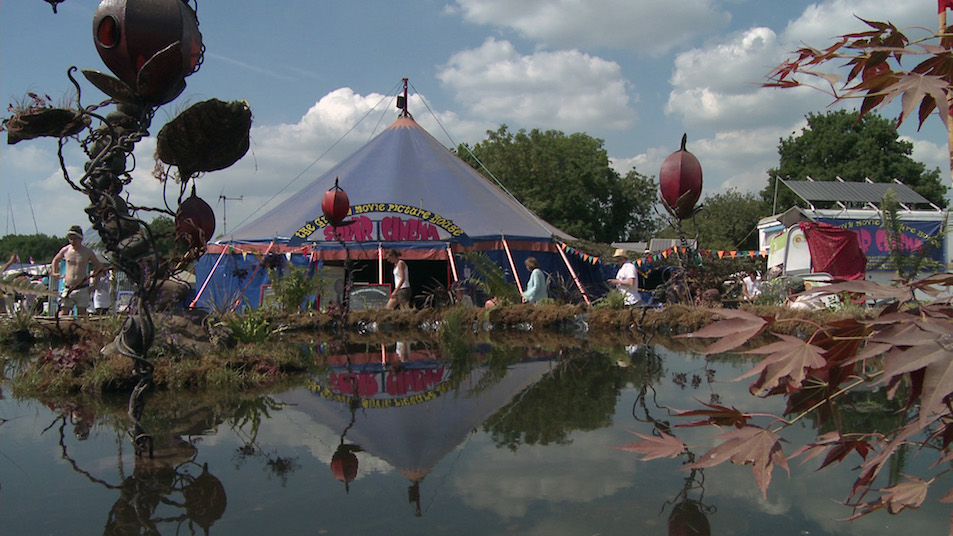 The Groovy Movie Glastonbury Festival Short Film Festival 2016 is open for submissions until May 1st 2016.

The Groovy Movie Picture House in the Green Futures Field offers a home for unusual and inventive low budget /no budget, independent short films and animations at Glastonbury. In 2016, the Groovy Movie is curating and hosting a second Short Film Festival, to showcase innovative animation, film and video from around the world. As below, they’re on the look-out for submissions:

Our short film festival will reflect the laid back and quirky vibe of Glastonbury with a series of informal, non competitive screenings in the legendary Groovy Movie cinema tent. If you have made a short film that would be great to screen at Glastonbury Festival, please get in touch. We are looking for Animation, Documentary, Comedy, Fiction, Experimental, Music video, Mash-ups, Remixes and everything in-between.

Due to the nature of the event we do not want any dark psychological horror shorts. We have nothing against this as a genre, but it really doesn’t work in a matinee, and we like to vary the mood and pace: your chance of getting your film screened may be improved by choosing one of your other masterpieces to submit!

Film Festival screenings will take place in The Groovy Movie Picture House – The World’s First Solar Powered Mobile Cinema. This beautiful, cosy, comfortable, custom-built cinema tent provides the ideal environment for intimate festival film screenings and performances for audiences of up to 200. Over the week of the festival thousands of people drop in. Some watch a 5-minute short film and move on, some have been known to stay for days… With around 200,000 people on site the potential audience is huge!

The festival will have 2 screenings daily: a matinee, suitable for all ages, and a late-night, anything-goes session (well, almost anything!). Successful submissions will be screened more than once during the festival.

Films should be:
– no longer than 15 mins
– good-quality H264/mp4 1080p or 720p.
– available for the curators to stream (we’ll need download links if your submission is successful)
– your own work (or work you were involved in and have the right to show)

To submit a film go to www.glastonburyfilmfestival.org and fill out our submissions form. Doing it this way helps us to keep things organised and stops it turning into a confusing nightmare.

You can post films to our Vimeo or Facebook pages if you want them in the public domain, but please fill out the submission forms as well otherwise we can’t submit your film to the curators.

The Glastonbury Festival Short Film Festival is completely independent and unfunded. By submitting your films you are giving permission for your work to be screened at Glastonbury Festival, and in the Groovy Movie Picture House at other arts events. We will not use or distribute your work in any other way. We will not be able to screen all films submitted, but if yours is selected we will let you know.