Hello Michael, how are things going?
Well, we’re obviously heading for the 40th anniversary of Festival next year. People are very interested in this 40 year thing. Everywhere I go, people are asking about. The expectations are really high. So we have to deliver on that. We’re trying to get the best headliners in the world.

Presumably you always try to get the best headliners you can.
Yeah, we do, but I think some of the artists out there are particularly interested in the fact that it’s 40 years. Last year was 40 years after Woodstock, so we’re following that pattern in a way. But we’ve been doing it loads of times, whereas Woodstock was only done about five times. We’ve done it almost 30 times now, I think.

Does it feel like 40 years since the first one?
For me, it’s most of my life, I suppose. And it does seem like my whole life has been consumed by it. Which is great, because it’s been such a fantastic exercise. The whole thing is so satisfying, and it’s just worked, hasn’t it? With all the hazards of the ’80s, I knew there was a fight on our hands then. There was the legal stuff with the council and the problems with the rather inaptly named "peace convoy"! So we had about 10 or 12 years of that to contend with. It all came good in the end, though. And the history of all that is actually quite important to us, I think.

Presumably you were pleased with the 2009 Festival?
Oh, yeah. This year’s was absolutely brilliant. It really was the best. I know I’ve said that before, but everywhere I go people tell me how much they loved it. With Springsteen and Neil Young and Blur, as well as all the other things that were going on, like Trash City, Arcadia, Shangri-la and The Park. Those things on their own kind of create another headliner now. 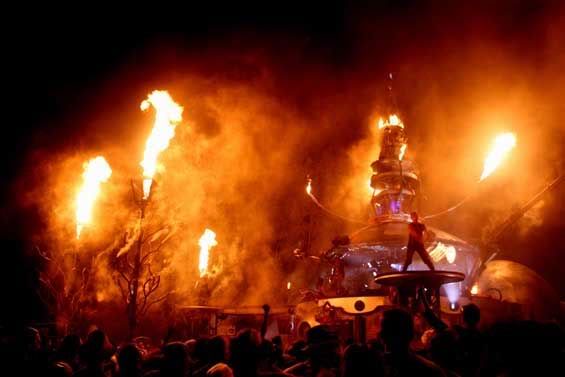 Do you get to wander around those places?
Well, I was walking through Trash City at four in the morning this year. Ha ha! I couldn’t get out, cos it was so crowded! One of the stalls gave me a veggie burger and it just kept me going. It was really nice, actually. I’d never had a veggie burger before, but I really enjoyed it. And I went and saw the Arcadia fire show, which just made me laugh so much. It felt like something out of Alice in Wonderland. It was so extraordinary and so out of context down there, really. You’re in the middle of the Somerset countryside and suddenly you see all this craziness going on!

So you do actually get to enjoy the Festival then?
Oh yeah, definitely.

It’s not stressful?
No, no. Year before last I was stressed, trying to sell all the tickets, with the Jay-Z situation, or whatever it was. I think it was the previous three years’ mud really. But in the end it all turned around at the last minute. It was such a huge thing, with Jay-Z and his wife standing there in the wings. It was amazing. She said she’d never seen anything like it in her whole life. So we got through that one, but it was a bit scary, because the costs are so high now. It costs so much to put this show on. It’s very difficult to make a profit.

Do you need to sell all the tickets?
Bearing in mind we’re taking out £2 million for the charities, we’ve got to sell all of them, yes. And, of course, the costs are always rising. Like the diesel costs went up by about 40% that year, which we hadn’t priced for.

The ticket price has gone up slightly this year.
A little bit, I’m afraid. I do try and hold it down, but the girls doing the budgeting are so thorough and so clever, and they said, "Look, the minimum rise we can get away with is ten quid more". It is a shame, because I really wanted to hold the price.

It’s never a question of you trying to line your pockets, then? You’re not just after a Ferrari or something?
Ha ha! No! Do you know what, I asked the bank for a loan for £100,000 to tart up the farm because of the new farming regulations about not spreading slurry in the winter. That’s driven by the European farmers, which is a good move, really. So we had to get a new shed to cover the farmyard, which cost a hundred grand. I phoned up the bank and asked if they’d lend me the money to keep the rain out of the slurry. He phoned back two days later and said, "We’ll let you have £70,000". I said, "Don’t be so stingy!" So, no, there’s no fortune lying around here! But we’re employing so many people and giving away so much to charity. We don’t really need a fortune as well!

The car park tickets have also gone up, to £15.
That’s right. We’re trying really hard to get more people to come on public transport. And the car parking costs are actually quite high. We have to rent extra land from surrounding farmers and it’s quite disruptive to their farm life, so they’re charging me more. So we had to stick another fiver on that, I’m afraid.

It seemed like a lot of people came for the full five days this year, to really get the full value.
Yes. There’s a hell of a lot to see for that money, really. If you see one band at Wembley it can cost about £80. So when you’ve got five days, it compares pretty well. And the bands are probably better than Wembley anyway!

You’ve also kept the deposit scheme for 2010.
Yeah, we like that. It gives everyone a chance. And if they don’t pay the balance, we give them £40 out of the £50 back. We just keep a tenner for costs.

Did many people get their deposits back last time?
No, not many at all. A very high proportion paid the balance. People are just so committed to the Festival.

And this year they’ve got an extra month to pay the balance – up to the end of February 2010.
That’s right. That gives them a bit longer to pay and it helps with the VAT for us, as it comes into a different quarter. So it makes it a bit easier for us as well, to be truthful.

Can you give us any clues about next year’s headliners?
Not really at this stage. But I see they’re moving the Michael Jackson tribute concert to Wembley Stadium in June next year, so there’ll be a lot of artists around for that, hopefully.

At this stage, are you just thinking of names and speaking to their agents?
I’m speaking to agents, and so are Emily, Nick Dewey and Martin Elbourne. We’ve all got our own contacts within the industry, you see. So, the four of us are at it all the time. 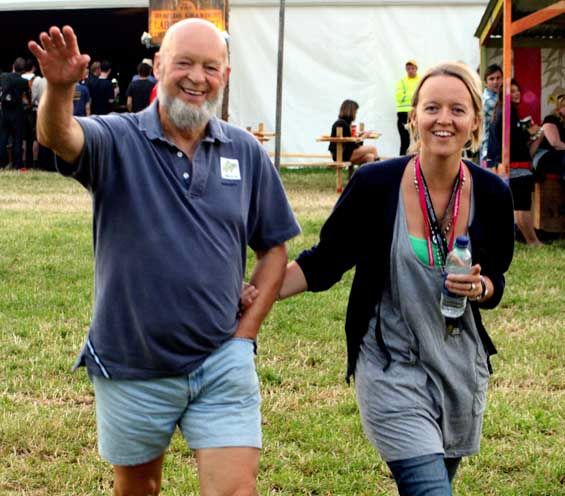 Do you and Emily tend to agree on things?
I think we’ve got a slight difference of opinion about headliners. But then it’s a question of whether they’re available. All the others shows – the Readings and Vs – pay a lot more for their headliners than we do. So she and I have to agree on who we’re going to stick our necks out for.

Emily seems to have blossomed from your apprentice to a proper partner in the Festival.
Yes, she’s very good on the bands front. I remember when she was about 12 we went to see an Oasis gig somewhere and Noel invited her to go to Paris with the band. Ha ha ha! She said, "Can I go to Paris with Oasis?" I said, "What?! You must be joking!" But I suppose the Festival has been her entire life. And she’s very, very good at it.

There was some talk of you retiring recently.
Yeah, I don’t know where that came from. There’s no thought of me retiring whatsoever. I’ve got no interest in retirement. One day I’ll have no choice, presumably, but while I can choose I’ve got no interest in retirement. It’s a labour of love. We did some land drains for some wet spots recently and we were picking up springs that we’d never seen before. It was fantastic. I so enjoy that work! So that’s my life. That’s what I do.

And how is the farm going?
Oh it’s lovely. The milk price is creeping up a bit too. The cows are out grazing across the fields now, of course. It’s looking fantastic out there. We’ve just done a second cut of the silage, which we’ve hardly ever done after the Festival. We’ve had a huge crop. And the tent peg situation is getting better. There’s less metal coming up in the silage machinery. They’ve got alarms on them you see; when they pick up metal they just stop. Two or three years ago, the alarms were going all the time. But now, there’s hardly any. That situation has improved dramatically. I’m really pleased about that.

Do you have any other new plans for next year?
We’ve increased the size of the camper van field. I think they’re a good idea. They offer shelter, comfort and warmth. And they’re all off site, so it doesn’t spoil the ambience of the site itself. There is a huge demand for the spaces, so we’ve increased it by a thousand.

Anything else?
Well, we really want to push the non-music things and show how diverse this festival is. It’s not all about the headlining bands, there’s so much else going on, with everything from Trash City to the Theatre & Circus fields. And people love it. I’m trying to increase the budget for that stuff. The area organisers are all so keen. We’ve really got a brilliant crew. They’re as dedicated as I am, really. That’s what makes it work.

So, will the 40th anniversary push apply across the whole Festival?
We’re just making the whole thing better, yeah. I know it’s pretty good at the moment, but we’re gonna keep at it!

Do you think it can keep going for another 40 years?
Oh my God, I dunno about 40! As far as I’m concerned, I’m gonna say another 10. And then let’s see where it goes from there!