Skip to content
Home / News / Poems from our poet in residence

Poems from our poet in residence

Poems from Jo Bell, our 2010 Website Poet in Residence 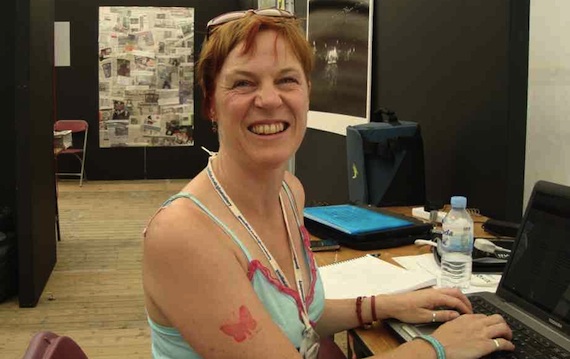 It’s more mud, and good times, it’s NO UNNECESSARY LOADS;
it’s my first ever festival at 51!  It’s 4 pints of Stowfords and one for the road.
Wet canvas, warm beer, no sleep, lots of noise;
silhouttes in the shower tent of soapy girls and boys;

It’s dancing until we fall over; it’s singing a song till we don’t know how.
It’s a hundred thousand strangers holding hands in a field;
it’s all of us, right here, right now.

The Glastopoem
Composed entirely of Tweets (or, for the purpose of this poem, Tweaks) from Glastonbury festival-goers

Lying on a stranger watching sunrise: losing my tent and my mind;
Giving birth and back the next day; Rolf Harris and Good Effing Times.

Awesome sun-up over the stones. Neil Young is angry, I feel.
It’s beating the Orb with our Sid. It’s chillin with Mickey off the Bill:

It’s like no other place on earth. It’s ‘Cup of Tea our Kid’?
It’s can in the hand, watching the band: First time: I’m getting annihilated!

Campsite steward, nightshift on a long and rainy night;
Honeymoon kisses and hedgerow pisses; the dog still itching cos ‘fleas have rights’.

It’s realising how happy I am – it’s Paul McCartney – Live and Let Die.
It’s watching the sunrise high on the hill – it’s ‘where the fuck am I?’

It’s Faithless saying ‘this is our church’; a monkey chased by bananas
It’s juggling for Guinness; hot air balloon ballerinas.

We Are More Than This

We are jugglers and firebreathers,
Inger-land supporters watching football on a screen:
we were hungover people this morning,
but that’s not all we’ve been.

We are jewellers and stewards; barkeepers,
beekeepers and witches raising spirits under trees;
smokers, tokers, bad t-shirt jokers –
but that’s not all we want to be.

We are gathered in Arcadia, the Green Fields and the Glade;
the Pyramid, the Leftfield, the cabaret or Other Stage;
we’re hotting up and chilling out, each finding our own bliss;
each one a dot on a global map – and together, more than this.

One for the stewards

In view of the recent figures
and the economic recession
I thought we were approaching
a double dip depression.

Projections were awful, but then we found
the Financial Times had turned another page;
The national love deficit was fixed
when Michael Eavis walked on stage.

The force of can-do, will-do,
have done for forty years
When Michael Eavis walked on stage
we all became multi-millionaires.

You were on your back in a field somewhere –
the smell of your bodies, and grass,  in the air.
You think there was music; there was sweat on your skin
in that snapshot moment when you knew you were in
way over your head, and head over heels;
the moment you knew that this was the deal;
you’d joined the club, done it for the first time
even though you knew it was probably the worst time.

But what if that first time was also the best?
The one that you knew would eclipse the rest?
What are the chances of that – what luck
to find that your first is your best ever – look,
I’ve had a few, but I recognise this;
the shiver that comes with a perfect kiss.
You can lose your virginity in a field or a suburban bungalow,
and lose it again in Pilton’s fields, at the fortieth birthday of Glasto!

My heart is becoming as full as the moon,
my soul is solar-powered; and it’s nice
to know that in this blue-sky June
even a cynic can still be deflowered – twice!

Things I Learned at Glastonbury

That sunshine makes dust of the fields of mud:
and Three Daft Monkeys are really good!
That a female speaker gets a female signer
and using a Moon-cup means I Love My Vagina.
That the Caribbean Kitchen does a brilliant chicken jerk:
that solar powered shower bags are great – they really work!
That a little poetry village makes everybody write:
that sometimes the most surprising folks will stay up all night, every night.
That Glastonbury’s 40 and will be here 40 years hence:
that Jean Binta Breeze gives out a free smile with every sentence.
That we’ve 45 stages of words and music, circus and magic to rock to:
that Dizzee Rascal swears a lot, and the Gospel Choir tends not to.
That it may be a huge ordeal going to the bog, but
that I have tasted the future – and its name is frozen yogurt.
That circus girls have great eyebrows, that there’s always somewhere to go:
and on top of these, I’ve re-learnt things that I should already know.
That the sweetest music is blackbird song
even if – especially if – you’ve been partying till dawn.
That life is short and life is good, and you need to live every minute;
that the stone circle means nothing without the people in it.
That dehydration hurts your head,
that it’s hard to sleep on a camping bed:
that friendship is constant, whatever the weather:
that the best way to spend a summer is together.
That Glasto is not just a field or ten, but a feeling we all could be better:
better neighbours and better friends. Let’s take that home with the litter.

We Are More Than This

We are jugglers and firebreathers,
Or Ing-er-land supporters watching football on a screen.
We are people with hangovers after last night’s excess
But that’s not all we’ve been.

We are barkeepers, bee-keepers, stewards and jewellers,
Witches raising spirits under old oak trees:
We are smokers, tokers, bad T-shirt jokers –
Buy that’s not all we can be.

We’re fellow travellers on common ground
Sharing the fruits of a lifetime’s labour:
We’re people with goodwill and stories to tell,
And for these precious days, we are neighbours.

So Jean likes to dance, and Tony likes to mosh,
And Rich likes to smoke, and me? I’d like a wash:
And hundreds like to party until dawn between the stones
And hundreds like to raise their hands together. Me? I stood alone
In a field with a hundred thousand friends, and
Smiling, read a text that said – if I was there I’d be holding your hand.

This Is What We Do

If we were whales, we’d do this underwater:
meeting in a circle of sea-monoliths,
a slow deep gathering of singing philosophers.

If we were apes – as we so nearly are –
we’d convene in the jungle canopies,
a shrieking parliament of fruit and grooming.

We have observed this planet now for decades.
We do not intervene, though we have seen
it grow less green, its climate shift, its volume levels
always on the rise. We’d leave it to its slow decline
and turn to finer ecosystems – but we find
a single Great Anomaly recurring every year.
One spot in their northern hemisphere becomes illuminated.
Around their longest day, a surge of light appears.
It’s inexplicable by any law of physics: generates
a form of energy we cannot name. It isn’t heat or light.
It can’t be quantified or broken down, but if it could
we have a feeling it might do this fragile planet good.
We hope that our research will soon bear fruit; we
note it in the meantime as a curiosity, and by the way
a thing unrivalled in the galaxy for beauty.