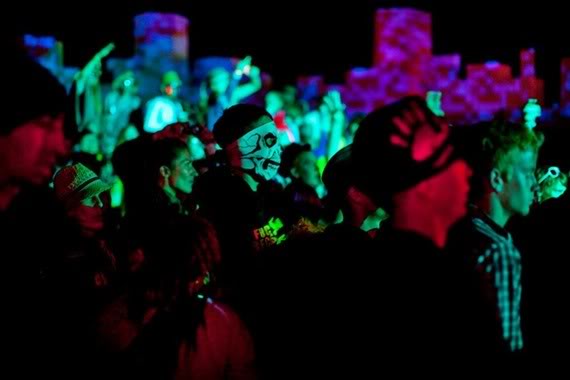 End of Jan and the Shangri-train is rolling, we’ve done the concept and design development, now working on detail and ploughing through the mountain of pre-production to be done. We’ve had some great news and there are a couple massive new scores that I can tell you about (as opposed to the ones that I can’t tell you about).

We’ve just scored the use of 4 x 35k HD projectors for the video mapping, making a total of a whopping 140,000 lumen being thrown at that wall. Last year we had 72k, you’d have thought that would be enough but no, so big thanks to Darkroom and LM Productions for that – hopefully the videomapping in the Hub will reach its full potential this year.

A big thank-you goes to The Wellcome Trust, who have enabled us to make us exciting new developments this year by commissioning us as part of their season on DIRT to design and build a whole new aspect to Shangri-La….…introducing The Skywalk, Decontamination Chambers and Virus.

As you may know, Shangri-La has a storyline that evolves year by year and willingly or not, you become part of it. In 2009 it was a pleasure city run by a corrupt dictatorship. In 2010 the ruling administration was overthrown and the city was opened up to rebels and chancers who had to fight for resources to carve out their own little piece of paradise.

2011 sees the population preparing to flee before, as they believe, the end of the world in 2012. They’ve given up trying to save the planet, it was all a bit too much like hard work so they’ve colonised somewhere else instead. It’s a new world, apparently much nicer, and only those who make the grade will be allowed to go there. Everything valuable has been shrinkwrapped in preparation for the first transport shipment to the new world (first ship leaves on Monday) and everything else, especially those vile and virus-ridden slums, is being left to rot in its own miasma.

In order to gain your place in the new and much nicer colony, please make your way to the decontamination facility, where the scientists there can determine whether you are in need of physical or moral decontamination. Post-decontamination, you will given your bio-hazard suit and only then will you be granted access to the Skywalk and be able to take the first step up out of the filth, your journey to the new world….