The Groovy Movie Picture House in the Green Futures Field offers a home for unusual and inventive low budget /no budget, independent short films and animations at Glastonbury. In 2015, the Picture House is curating and hosting a Short Film Festival, to showcase innovative animation, film and video from around the world. As below, they’re on the look-out for submissions: 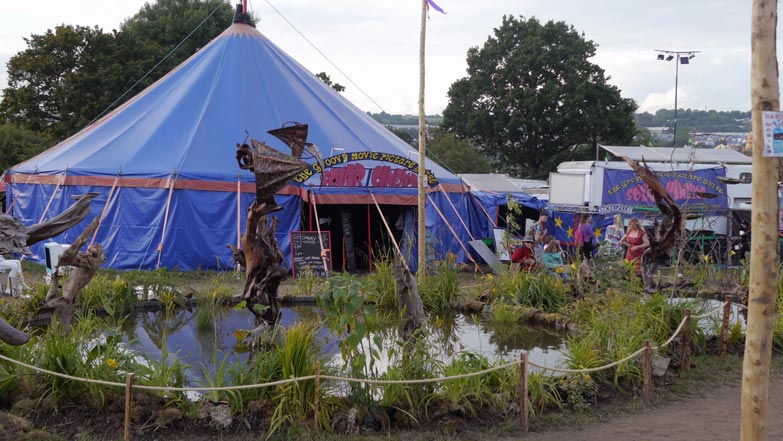 Our short film festival will reflect the laid back and quirky vibe of the event with a series of informal, non competitive screenings in the renowned Groovy Movie cinema tent. If you have made a short film that would be great to screen at Glastonbury Festival, please get in touch.

We are looking for Animation, Documentary, Comedy, Fiction, Experimental, Music video, Mashups, Remixes and everything inbetween. We will have a daytime programme, suitable for all ages, and a Late-night Session, where anything goes! Films should be no longer that 15 mins, preferably mp4 up to 1080 resolution, and must be your own work.

Please post streaming links to our Facebook page:  www.facebook.com/glastonburyfilmfestival or preferably via our Vimeo group: www.vimeo.com/groups/glastonbury or email us: glastonbury@groovymovie.biz

Films will be screened in The Groovy Movie Picture House – The World’s First Solar Powered Mobile Cinema. This beautiful, cozy, custom built film tent provides the ideal environment for intimate festival film screenings and performances for audiences of up to 200.

The Glastonbury Festival Short Film festival is completely independent of the Glastonbury Festival and is unfunded. We cannot offer a fee or tickets for selected films, but you will be notified of screenings. By submitting your films you are giving permission for your work to be screened in the Groovy Movie Picture House Cinema Tent at Glastonbury Festival, and at related arts events. We will not use your work in any other way. But you must ensure that your film is fully cleared for these use(s) and that you have permission from any contributors to your Film (including performers) and from any relevant copyright owners (such as people who have composed any music and/or the owners of any sound recordings incorporating that music) and that your film is not defamatory.

We will not be able to screen all films submitted, but if yours is selected we will let you know.