Skip to content
Home / News / We Have Band interview

We Have Band interview

We caught up with Darren from this year’s Emerging Talent Competition winners, We Have Band, ahead of their four Festival performances. 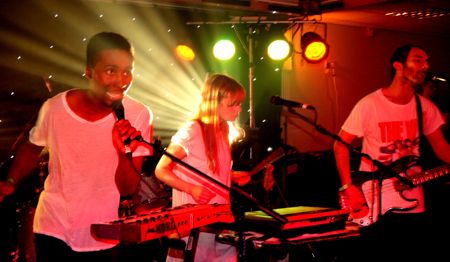 Hello Darren, how are you?
Very good, thanks. We just got back from Paris actually. We squeezed ourselves onto a London bus with the suitcase, the guitars. It was quite crazy. But there’s no point wasting money on taxis!

So, how did you come to enter the Emerging Talent Competition?
Actually, our manager did it for us. I think he just thought it would be nice. And then we found out we were in the final, and we were really, really excited.

Have you been to the Festival before?
Yeah, we’ve all been quite a lot over the last ten years.

So, then you went down to Pilton for the night of the ETC finals.
Yeah. It was quite strange to drive the same way you’d drive to the Festival. We went to the Working Men’s Club. It was crazy: you had a strict 20 minutes to do your thing, with a really quick turnaround. It was quite intense. And. of course, Michael and Emily Eavis were there, plus all the bookers from the stages. The whole thing felt quite surreal really.

Did you think you did a good set?
Yeah, we were pretty pleased. What we do is quite upbeat and we were playing quite early on, but we thought we should do it as we would at the Festival, so we totally chucked ourselves into it.

Did people respond?
They did, yeah, which is always a good sign. But the finals were done over two days, so there were six other bands we didn’t see, the night before us. And also you don’t really know what they’re looking for – it was all very varied. I guess they were just looking for something they believe in, regardless of genre.

When did you find out you’d won?
On the night. That was quite terrifying. Michael went up and thanked everybody and then said, "Everyone here is a winner, but the actual winner is We Have Band". We were sat there and we were all like "That’s us!"

Did you find yourself really wanting to win?
I think so, yeah. We didn’t really talk to each other about wanting to win, which is a surefire sign that we probably did! But it’s Glastonbury, you’re in the room with the Eavis family, you can’t help but get really excited. We were ecstatic to win.

Has it helped the band?
Yeah, absolutely. We’re playing four times at the Festival, which is pretty amazing. And Glastonbury is one of the most respected festivals in the whole world. So everywhere we go now, people ask us about winning the competition. Everybody knows Glastonbury.

And the judges were industry bigwigs.
Absolutely. I think that’s why it felt like such an honour – you really felt like these people know their stuff.

Golden Silvers were joint-winners last year and they’ve gone on to get a record deal and lots of attention.
Yeah, they have. They’ve done really well. Hopefully we’ll follow in their footsteps!

So, you’re playing four performances at this year’s Festival. That’s quite busy!
It is! That’s another thing that we’re now currently not talking about to each other. We’re excited, though. We’re on straight after Maximo Park open the Festival in the Queen’s Head on Thursday. So we’re the second band of the Festival!

Where else are you playing?
We’ve got the Dance Tent on Saturday, and then John Peel and Guardian Lounge on Sunday.

Do you have hardcore fans you think will come to all four?
Some people have said they will, yeah. It’s a proper mission!

Perhaps you should reward those who get to all of them.
That’s quite a good idea! If you get four stamps you win a CD! We should have a think about that.

Are you nervous about the weekend?
Yes, a little bit. We’re playing some big stages. But, at the same time, I can’t wait.

Where are you staying?
In a B&B just off site. If you play for half an hour you get quite sweaty, so, with four shows, we’re definitely going to need to have somewhere to shower!

As long as it’s not one of those B&Bs with a 10pm curfew.
Ooh, good point. We haven’t checked that. Actually, though, it’s the same B&B we stayed in for the competition, so it’s like our lucky place to stay.

Who are you looking forward to seeing play?
Very excited about Blur, Animal Collective and Passion Pit. Loads of people really. And the Boss, of course.

What is your top moment from previous Festivals?
Let me just ask the others. [Confers for a while.] OK, we’re saying Radiohead on the Pyramid Stage, the second time. That was amazing. And I had a bit of a religious experience watching Bjork on the Other Stage a couple of years ago. Oh, and the Gossip in the John Peel tent were phenomenal a few years ago.

Do you have any top tips for Glasto virgins?
Well, bring your wellies. That’s an obvious one, but people still come without them. Regardless of the weather, bring them. You’re on a farm afterall. I like wellies. Then just wander. And come and see We Have Band as many times as possible.

Can you push to five performances?
Well, maybe if you see us around, you can stop us and ask us for a quick a capella.

What’s coming up for the band in the rest of the year?
We’re doing quite a few more festivals during the summer, across Europe, then we’re going into the studio to record our album.

Have you signed a record deal?
No. We’re going to do the album first. We want to take the reigns for now. There is interest, but we want to wait until we get the right label. You can do a lot on your own these days.

And then next year you’ll be back at Glastonbury?
That’s right. Pyramid Stage, Saturday night, 2010! If you happen to see Michael or Emily, please could you let them know.

Click here to check out We Have Band’s MySpace