Skip to content
Home / News / "We're absolutely over the moon!"

“We’re absolutely over the moon!” 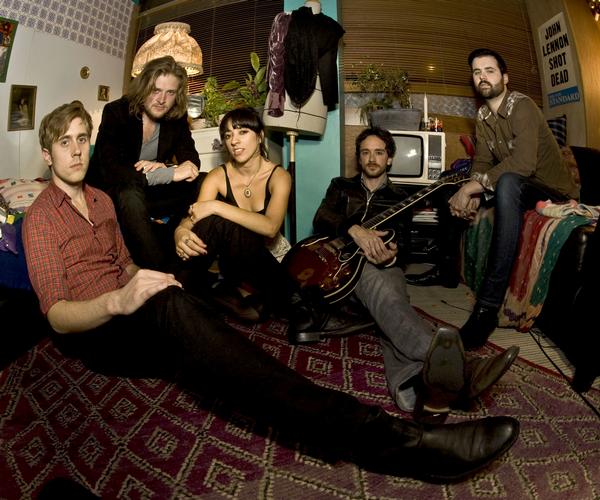 Following yesterday’s announcement that My Luminaries were the early bird winners for this year’s Emerging Talent Competition (which closes on 25th January), we caught up with the band’s singer, James Ewers.

Hi James. Presumably you’re quite pleased to have won a slot at Glastonbury 2010?
Of course! We’re absolutely over the moon! Its the greatest festival in the world, and we realise how lucky we are to be playing. Every band in the world wants to play Glastonbury.

What made you enter the competition?
Leila (keyboards) had seen it advertised on the Glastonbury site and repeatedly reminded me to apply before Xmas so we wouldn’t miss the early bird deadline. I’m embarrassed to say that I was in no real rush to apply, because I’ve never won anything, and My Luminaries haven’t had much in the way of luck….so, thanks Leila, your persistence paid off!! There’s a lesson to be learnt there.

Have you been to Glastonbury before?
I actually played on the main stage in 2002, as part of an act to raise awareness for AIDS in Africa. I was playing guitar for Cameron Saul, a songwriter who was running the Mulberry ‘bottletop’ campaign at the time. I fluffed up on the first few chords and was about to stop in shame, when Michael Eavis walked on to show his endorsement for Cameron, and the crowd went crazy! So luckily I had the chance to start the song again and it was OK. There were 50,000 people watching us, as they were there to see Rolf Harris who was on afterwards. I’ll never forget the hand-written sign in the crowd "ROLF…THE BABY’S YOURS!!"

Other Glastonbury highlights include skanking to The Specials and Madness, seeing Neil Young, Springsteen, and I have to mention an all time lowlight – and something I’m really not proud of – taking an excessive amount of herbal highs and paying the price for the next 2 days. Though the medical team were extremely friendly and professional, I feel bad for wasting their precious time and towels.

Also unlike any other festival I’ve been to, Glastonbury really has a certain communal family spirit, which in these times is easy to assume doesn’t exist. You see mothers and fathers carrying their babies, groups of friends in full fancy dress, and on such a scale its totally unique and magical.

Your prize is a slot at the Queen’s Head on Thursday. Excited?
Very. Sam (drummer) and I went to Glastonbury last year, and Sam as always turned to me and said "We’ll be playing here next year mate". I think we were watching Status Quo at the time. They seem to install that sort of hope in people! The Queen’s Head stage always has a great combination of new and more revered artists, and of the newer ones, a lot seem to go on to bigger things. So we’re excited to be a part of that.

We’ve been on the circuit for nearly 6 years now, and we’d gone into the new decade having just parted from our third manager, and realised that we couldn’t afford to put out our album and single the way we’d planned and felt it deserved. The initial reaction to our album had been disappointing to say the least. When I got the call saying that we had been selected to play from several hundred bands, I literally said to the man on the end of the phone, "Do you realise what you’ve done for us?! You’re like an angel from above!!" I think he found that a little weird!

What can folks expect if they come and see you?
We’re gonna be having the time of our lives, I can guarantee that. It may be the only festival we play this year and may be the only time we ever play Glastonbury, so we’ll make sure we relax, just do what we do best and make it worthwhile. We’re definitely better suited to big occasions, and we always rise to them. If you look carefully, you might see me turn to Sam and mouth "We’re here mate"!

Of course, you’re also still in the main Emerging Talent Competition, with a chance of winning a main stage slot at the Festival. How do you rate your chances now?
I presume our chances must be fair, and we’re open to every possible opportunity, but we realise how fortunate we are to have won this slot already. There are thousands of other great bands out there who deserve a shot, and we won’t grumble if we don’t get selected. We’ll be there anyway.

Finally, what else have My Luminaries got planned for 2010?
We’re touring end of Jan/early February, releasing ‘Parasol’, the first single from our album ‘Order From The Chaos’ in March. And the album will be available to buy online from early February. Its actually available now from our myspace, free, but not for much longer, so hurry. Hopefully more festivals, more tours, more people at the front singing our songs back to us. You can’t ask for more than that. See you there!!

For more information on My Luminaries, head over to www.myspace.com/myluminaries