We’re very pleased to announce that the official Glastonbury 2013 mobile app is available to download, for free. The app, which has been built by EE, is the only official mobile app for this year’s Festival. It’s available for devices using Apple iOS and Android. Click the buttons below to download the app now.

Download the app (whatever network you’re on) and you’ll be able to see who’s playing where, with full stage listings from the Guardian Guide. You can even make your own schedule and set reminders.

For the first time, the app will also feature content from the Festival’s broadcast partner, the BBC, with live streams from six stages accessible within the app (making it an essential download for anyone at the Festival and for those experiencing it at home).

Plus, you’ll get all the important Festival news from us in real time and an interactive map of the whole site, allowing you to pinpoint exactly where you are.

For more information on the app, including full T&Cs, head to ee.co.uk/Glastonbury

And if you need to charge your mobile while on site, don’t forget that EE’s Recharge tents allow anyone – regardless of which network they’re on – to charge their battery. The tents will also give you a chance to try free super-fast mobile wifi powered by EE’s on site 4G network. 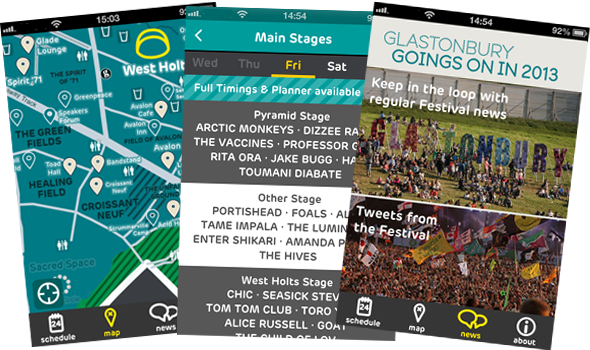