Glastonbury celebrated its 40th anniversary in 2010, a milestone that brought a fresh buzz of excitement to the Worthy Farm valley. The weather was also suitably celebratory, with warm days and balmy starlit nights.

Car parks opened up on the Tuesday night for the first time prior to the pedestrian gates opening on the Wednesday morning. From 2100 on Tuesday night to around midnight vehicles flowed into carparks with no problems. From 0600 traffic levels increased dramatically with major queues developing on all routes by 0730 as many people tried to arrive for the 0800 pedestrian gate opening. Between 0800 and 1400 there were delays on all routes to the site with the longest being on the route from the M5. The vast majority of ticket holders arrived on site on the Wednesday, earlier than in any previous year.

With the sun beating down relentlessly the demand for water was enormous, so the decision to build a second new permanent reservoir this year was more than vindicated. Both reservoirs hold about a million litres of drinking water each. Just over 800 taps were installed across site as were 600 basins, but there were still queues for water. In 2010, there were also some 4,600 toliets (a mix of longdrops, African, polyjohns and flushing) and 670 metres of urinals for the guys and much more modest 100 metres of “she pees” for women.

Visually, the anniversary was recognised by two giant dates on either side of the Pyramid stage and a Hollywood-style display of letters that spelled out “Glastonbury 40” across the site’s southern grassy slopes. Classic photos taken by local Somerset photographers across the decades were exhibited in the main backstage area. Several performers from the original 1970 event appeared, including DJ Mad Mick, who dropped the Festival’s very first tune.

The Leftfield stage returned in a different position (close to the Glade) and with a new curator, Billy Bragg. More music was mixed with the usual wide range of political discussion and debate. For the second year running a giant screen of painted and embroidered banners broadcast messages such as “Give Bees a Chance”.

Two new areas were created in the late night corner of the festival – The Common and the Unfair Ground. Arcadia shot bursts of fire into the sky from its temple-like structures as dance music pumped through the night. Shangri-la’s casbah of the weird and wonderful was as rammed as ever.

The JazzWorld stage was given a new identity as West Holts. This was the original name of a “halt” on the railway line which once ran through Worthy Farm; Michael Eavis could remember driving cattle across it before the next train arrived.

Sunday was given a downside by the defeat of England’s footballers in the World Cup, an event for which two special fields were allocated with their own giant screens. 80,000 fans watched the match. More successful was a game played out in front of the Pyramid stage on Thursday, when Festival-goers representing England beat the Rest of the World and raised £9,000 for charity.

As ever, there were many musical highlights. Gorillaz filled the Friday night Pyramid headline slot with grooves and guests, following U2’s enforced cancellation, although that band’s guitarist, the Edge, did turn up do a song with Muse for their storming Saturday night slot. The final headliner, Stevie Wonder, brought things to a close on Sunday night with a wonderful, hit-filled set, which memorably also featured a duet of Happy Birthday with Michael Eavis.

Aside from the headliners, Shakira and Scissor Sisters lit up the Pyramid Stage on Saturday with suitably exuberant pop (the latter featured a guest performance from Kylie Minogue), while Biffy Clyro and Radiohead’s Thom Yorke/Jonny Greenwood played warmly-received surprise slots in The Park.

Other Stage highlights included a rousing Pet Shop Boys set, a huge turnout for Florence and the Machine and a guest appearance from Doctor Who for Orbital’s Sunday night set. Meanwhile, at the John Peel Stage, Groove Armada, Mumford & Sons and The xx were among the acts who attracted big crowds and warm reviews.

Over in the Dance Village, Glastonbury veterans The Orb and Fatboy Slim once again whipped up a storm, while the rise in urban pop music was reflected with blistering sets from acts including N-Dubz, Chipmunk, Plan B, Kelis and Tinie Tempah.

It was, all would agree, a vintage year. Michael Eavis told the world’s media at his traditional Sunday morning press conference: “It has been the best party for me – the weather, the full moon and last night a crowd of 100,000 people, every single one enjoying themselves.” 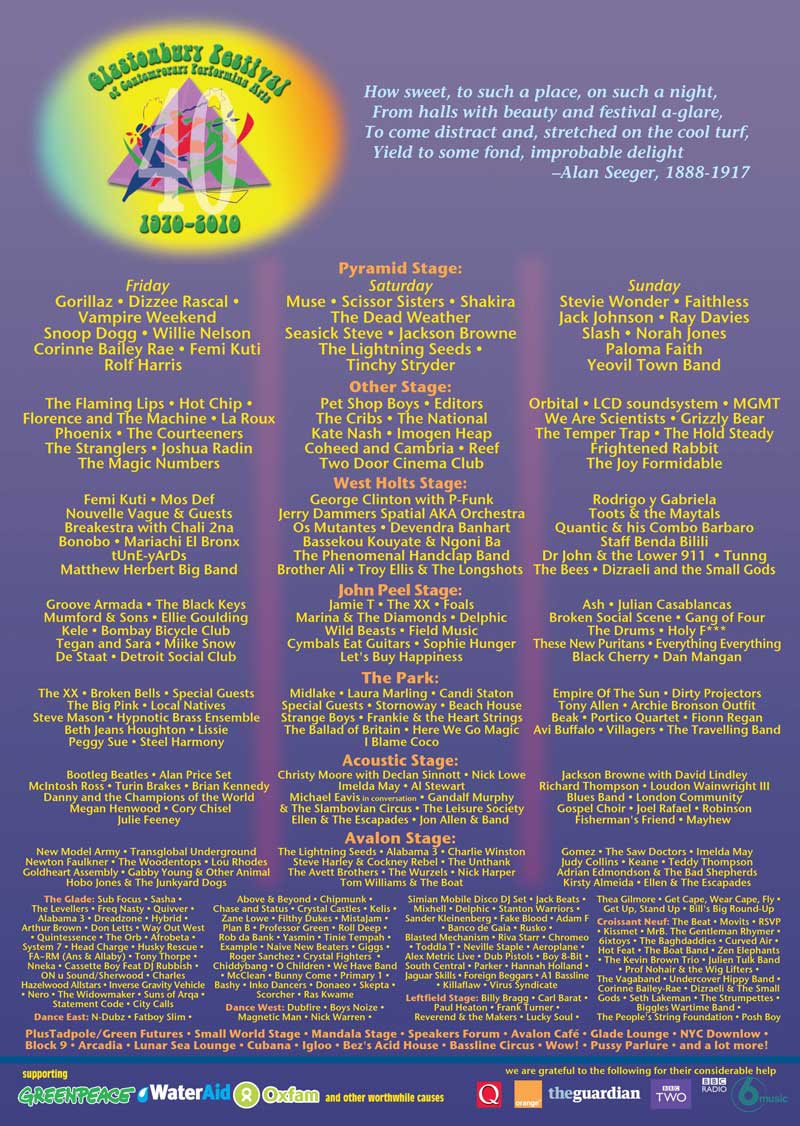