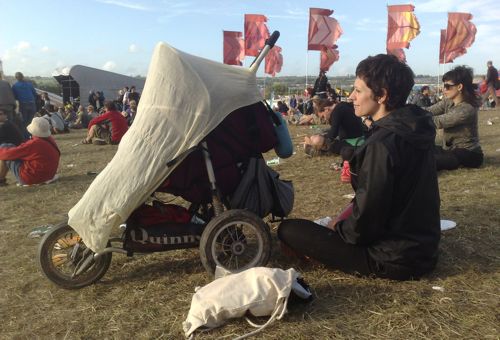 We asked Alexia, the mother of a nine year-old, six year-old and two year-old to share her experiences of bringing them to Glastonbury
every year since they were born.

There’s nothing quite like your first glimpse of the Glastonbury Festival site. That moment when the hills part to reveal a vast valley of multi-coloured tents and flapping flags is genuinely awe-inspiring. It’s not just the scale either: from its amazing line-up to its uncanny ability to conjure kindness from strangers, anyone who’s been knows what a wonderful place this temporary town is. And if it blows your mind, imagine how your kids are going to feel.

If you’re a parent, you won’t need me to tell you that going to Glastonbury with children in tow is a rather different experience from going on your own. But that doesn’t mean it’s any less enjoyable. Experiencing the Festival with young kids can be just as memorable, exciting and fun as it was as a teenager. Different, yes, but not worse.

So what are the downsides? Well, packed tents or main stage throngs are definitely tricky with pushchairs or small children. That means you’ll be stuck on the periphery if you’re going to catch any action from these stages. But this is possibly the only real sacrifice you’ll have to make for the sake of your kids (well, that and having to remain compos mentis). But while you may miss out on the moshing, there’s a whole new perspective to be gained from catching the headliners from the sloping edge of the Pyramid stage just beyond the sound desk. Not only is there some breathing space here, but watching the gig above the sea of people on a hillside lit by smouldering campfires, is a spine-tingling experience all of its own.

Also having young children at the Festival does not mean you have to settle for enjoying the muffled thud of the headliners from your tent as your dearest offspring finally succumb to sleep. In fact, the smaller they are, the easier it is to move about and stay out late. You will, though, need to bring a decent form of transport. Having an off-road three-wheel buggy, small wagon, or kids’ bike trailer is pretty essential, as is a rain cover for any of them. That way, when tiredness sets in, junior can be comfortably tucked-up in a cosy nest of warm blankets, but you still remain mobile. 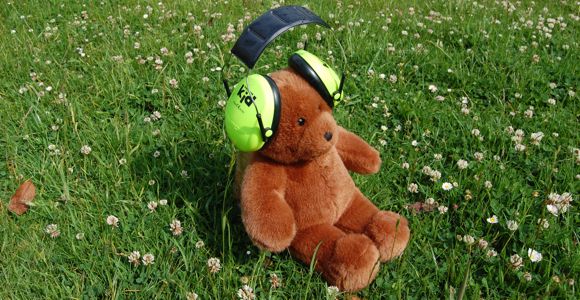 Children’s ear defenders are definitely a worthwhile purchase, for use both when they’re awake and asleep. In fact, since Gwyneth Paltrow’s kids were seen sporting these ones at Live 8, they’ve even had an air of designer glamour about them (although they’re actually fairly cheap from eBay sellers). The only tricky part is convincing your child to wear them, although that’s obviously not a problem once they’re asleep.

If you’re worried about your kids getting lost, it’s definitely worth writing your mobile phone number on your child’s arm in marker pen — or pick up a wristband on which to write it, from the Kidz Field. Dressing them in bright coloured clothing will also help you to spot them in a crowd if they try to wander off. If they do get lost, tell them to ask for help from someone official, another adult with children, or at one of the Information Points. See the Children’s Advice page for more on that.

If you’re coming with other friends with children it’s maybe worth planning ahead and arranging a couple of hours where you take the strain for each other: it is still nice to get a chance to explore the site without having noses to wipe and bags of kiddie kit to lug around. But, at the same time, you wouldn’t bring your children to Glastonbury unless you actually wanted to experience it with them. And just wait until you see how much there is, geared to entertain them.

Over in the Green Kids Area — at the back of the Green Fields —  the ever-impressive ark, The Cadmus, plays host to chose-your-own-adventure pirate games for the over-fives. While at ground level, tiny-tipis and toddler toys provide a haven from the hectic for the under-fives. There are also some handy — and clean — kids-only compost toilets. And if you need to zone out for an hour or two, there are children’s films screened at the Pilton Palais Cinema Tent.

But the Kidzfield is the main draw. Open from a pleasingly early 9am and hosting baby changing facilities and children-only toilets, it’s a bona fide children’s wonderland. There are baby soft play areas and child yoga workshops; sand pits and children’s circus and theatre acts; story-telling, face-painting and arts and crafts. And in the midst of it all, the mighty helter skelter. And none of it costs a penny. What’s more, it’s all conveniently situated next to one of the Festival’s two family camping areas (get there as early as possible to bag a spot in those).

Despite all it has to offer, one of the best things about Glastonbury is its friendly, utopian vibe. People are just nicer here. In that spirit, it’s worth asking at food stalls if they’ll do you a children’s portion — they’ll usually say yes, and often charge you very little for it. You can also keep costs down by bringing some snacks with you. Fruit, cereal bars, cartons of juice, lidded cups for water, rice pudding and custard pots are all handy to have. Milk can be bought on site.

With so much to see and do at Glastonbury it’s easy to get caught in the moment. And that’s, of course, one of the real joys of the experience. From what I’ve found, it’s best to try not to worry too much about adhering to your kids’ usual bed times — or even meal times for that matter. For a few days, just abandon your usual routine and let them sleep when they’re tired and eat when they’re hungry. Like anyone coming to Glastonbury, you and your kids really will get the most out of it if you go with the flow.

But while the Festival’s ace child-focused areas are undoubtedly thrilling, it really is worth venturing beyond their boundaries. Glastonbury Festival, like all who’ve been will tell you, is itself a Technicolored wonderland and there is so much to ignite and inspire these little creative minds. From the mind-boggling, rib-tickling acts in Theatre and Circus Fields, to the sonic gems blaring out from the many music stages; surreal sites to stumble across and moments of impromtu madness to see, and there is so much here for children and their grown-ups to experience and enjoy. Kids get Glastonbury. Have an amazing time exploring it together.

Suggested packing list:
Warm blankets — it really does get very cold at night
Kiddie transport (with rain cover!)
Flannel or wash cloth
Anti-bacterial hand foam or gel – the foam ones do not sting little hands like the alcohol-laden gels
Hats and suncream
Waterproofs — wellies, jackets and trousers
Shower curtain or plastic-backed picnic blanket to sit on
Bucket/travel potty — for midnight wees and must-go moments
Torch

Click here for more info on the Kidzfield, now including line-up details for its various tents