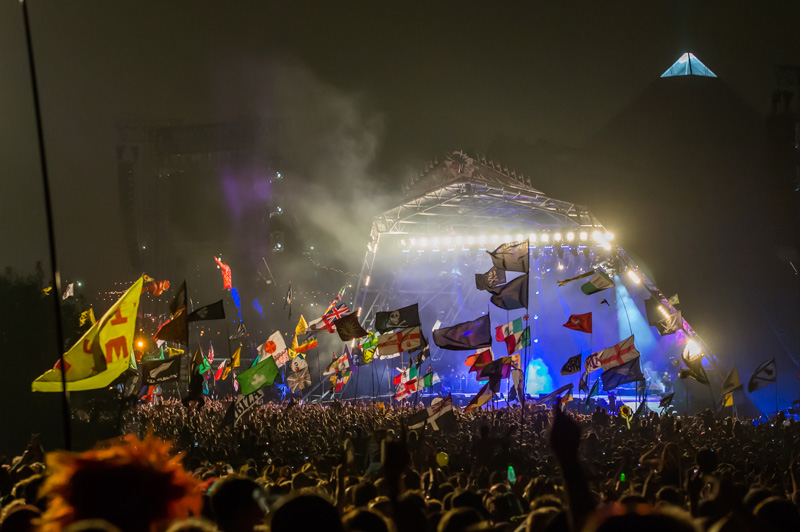 The Pyramid Stage, is the most instantly recognised festival stage in the world. Rising from the site of a blind spring close to the Glastonbury Abbey/Stonehenge ley line, it is now in its third incarnation.

The first pyramid stage was built in 1971 by theatre designer Bill Harkin and his crew from scaffolding, expanded metal and plastic sheeting. It was believed that a pyramid is a very powerful shape: the apex projects energy upwards while energy from the stars and sun are drawn down. The original Pyramid resembled a diamond transmitting pure vibrations into the night.

In 1981 a permanent structure doubling as a cowshed and animal foodstore during the winter months was built on the same site using redundant telegraph poles and surplus box section iron sheets from the Ministry of Defence. This Pyramid grew to symbolise the magic of Glastonbury Festival.

In 1994, shortly before the Festival, it burned to the ground.

In 2000 the phoenix rose from the ashes. Using designs based on the Great Pyramid of Giza in Egypt, Pilton villager Bill Burroughs constructed a Pyramid Stage four times the size of the original. The glittering 30m steel structure now covers 40m x 40m, uses four kilometres of steel tubing and weighs over 40 tonnes. All materials and processes passed a Greenpeace environmental audit.

Impressive as the list might be, we wouldn’t recommend that you hang out in the Pyramid Stage area all weekend. Across the festival site, there’s so much more to see and hear…